Book 1 of the Sim War series

The final book in the Sim War series

Glory Main is one of those books, once started, you cannot put down. Classic military science fiction, Glory Main harks back to the likes of Heinlein’s Starship Troopers, Barry B. Longyear Enemy Mine, and David Weber’s Honor Harrington series of novels, and along with well fleshed out characters, clever world-building, is a fast-paced gripping read.

Featuring a small diverse group of enduring characters who are thrown headlong into a life or death survival situation, Glory Main jumps right in at the deep-end. Our cast of struggling survivors include a young, greenhorn lieutenant, a shipboard shrink, a Spartacan Scout, read: special forces commando type, and a map-maker who also happens to be a conscientious objector. This alone should tell you what to expect from four such opposed personalities. Throw in they’re stranded on a harsh almost barren world amid a bitter and terrible war, were lies from Command are the norm. And fighting not only themselves, the local flora and fauna, and a slow death by starvation, but an enemy who, as it turns out, looks like them—The Sims. The simulants. The facsimiles—And the stage is set for one hell of a battle of survival, wits, determination and sheer will against the mounting odds.

Plausibly written throughout, the tech and its use in Glory Main is very familiar and yet, still manages to have the futuristic and otherworldly edge to it. As does the setting. Just when we think we understand what’s going on, O’Neil tosses in another roadblock and obstacle for the characters to over come. But far from painting his characters into tight corners, creating either false jeopardy or contriving situations, you feel you are there, on this gritty, unforgiving world suffering through the worst with each and every character. And while written in the first person POV, as seen through the eyes of Mortas, the story still unfolds naturally, and realistically.

The best part of any story, for me at least, is whether or not the author manages to pull off a plausible blindside, something O’Neil does right near the end, in Glory Main. Not only was I (like many I suspect) happily surprised with a clever plot twist, but I suspect O’Neil has set us up for what we know must come in successive installments. And yes, I can’t wait for the next in the series. The world-building, language, descriptions and info dumps—when they came—never once over shadowed or weighed the story down and the pacing was near on perfect.

All-in-all, Glory Main is a well-written, fast, and compelling read. Henry O’Neil certainly knows the military, and knows how to craft an engrossing story. And whether or not you enjoy reading military science fiction or not, the story, which is character-driven and character-based, is still worth a read!

Glory Main is everything an updated version of Starship Troopers should be, a cracking good read. 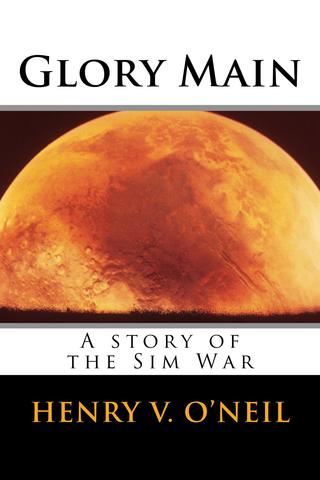 Four strangers on a barren planet. No water, food, or weapons. Just plenty of enemies.


I'm very pleased to announce that Harper Voyager has picked up my science fiction novel Glory Main and the next two novels in the Sim war series. All three novels will be released in ebook and paperback, beginning in the summer of 2014.

In the meantime, please feel free to check out sample chapters of  Read More
Be the first to comment